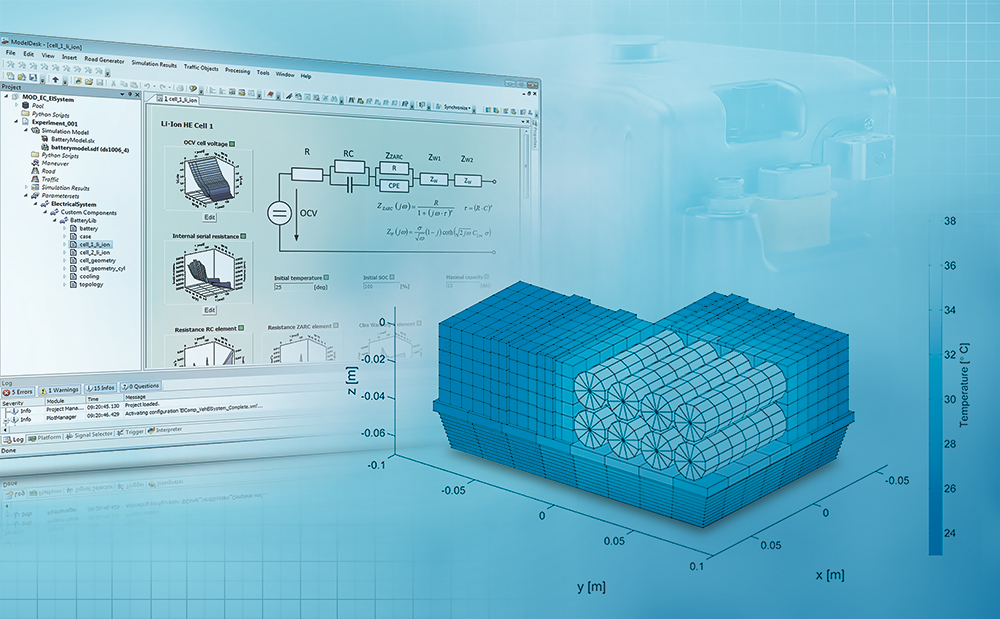 In a joint project, dSPACE and RWTH Aachen University have developed a simulation environment for electrical energy storage systems that supports a broad range of physical battery characteristics. Under the name “Toolbox Speichersysteme” (Energy Storage Toolbox), a simulation model developed at the Institute for Power Electronics and Electrical Drives (ISEA) of RWTH Aachen was combined with a graphical user interface by dSPACE. The resulting solution makes it possible to realistically and conveniently simulate the electrical and thermal behavior of various battery technologies, supercapacitors and other electrical energy storage systems, according to their design and cooling systems.

For lithium-ion battery technology, which is critically important for electromobility, the simulation environment gives developers many different configuration options. These options include various aspects such as battery technology, the geometric shape of a battery, the number and arrangement of storage cells, wiring topologies or the peripheral cooling system. The simulation model uses these configuration settings to calculate the thermal and electrical behavior of a defined battery, both at the cell level and overall system level, and simulates thermal effects with a high local resolution. Developers, therefore, can now analyze the cooling strategy and identify potential hot spots that could occur during battery operation.

The simulation environment is integrated into the dSPACE tool chain so that the batteries can be simulated either offline on a PC platform or in real time together with a battery management system ECU on a hardware-in-the-loop (HIL) simulator. Basic functions, such as automation and data management, are supported. This enables a seamless development process from battery system design to ECU testing of the battery management system (BMS). Toolbox Speichersysteme was already validated in an industrial project and is now available as a proven solution for development projects.

The research project, which receives funds from the European Union and the German state of North Rhine-Westphalia, focuses on the model-based development process for energy storage and battery management systems (BMS). Such processes are widely used in the automotive sector for electric drive systems and electrified drivetrains, among others. Toolbox Speichersysteme supports the complete process, from the virtual design of a battery, to in-vehicle simulation, to testing the BMS ECU. The model can be configured via parameterization. For example, the battery topology, the battery’s geometric shape, the electrical characteristics, and the level of detail can be defined via parameters and used immediately in the simulation. The simulation model can be used in traction applications and also in other areas, such as energy supply and industrial and housing technology.

Navigating the Battery Production Multiverse To Improve Speed to Market

The Unique Battery Requirements of Laptops and Power Tools

Fostering Entrepreneurship and Investment at the Advanced Automotive Battery Conference

Spotlight on Graphite: Prospects for Europe and North America